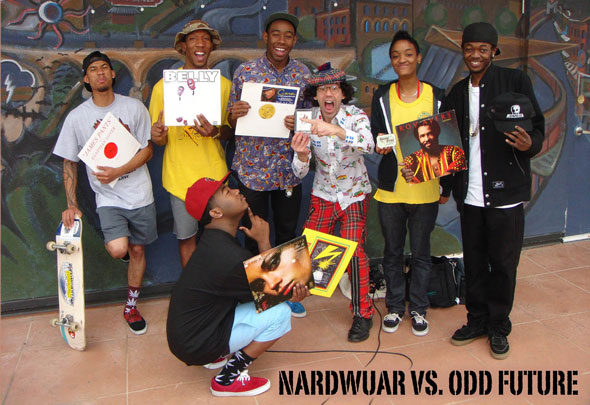 And who do you have beside you R.Kelly, Tyler?

T: I don’t know. Bacon is the fucking greatest thing ever.

H: I know. You can put syrup on it and you can eat it with bread.

And now I have something special for you, Tyler and Hodgy, a gift I have for you, some bacon… [hands Tyler soap]

T: Soap! Goddamn! Nigga, it smells like bacon! Goddamn, nigga, bacon soap on a bitch nigga! Black, fat bitches about to be on my dick. Pork rinds and shit, nigga!

So bacon gets you pretty excited but also skating with Jason Dill, that gets you excited right?

And he shot a video, the video for Skate, the video game, in Vancouver, B.C., where I’m from. So I thought I’d give you guys a gift from the legendary skating company in Vancouver, Skull Skates. [hands Tyler a hat]

Could you please tell us, is your mom half-Canadian?

T: Yeah, what the fuck? How do you know this shit? Yeah, my mom’s mixed. Oh shit. What the fuck? You with the feds, nigga? 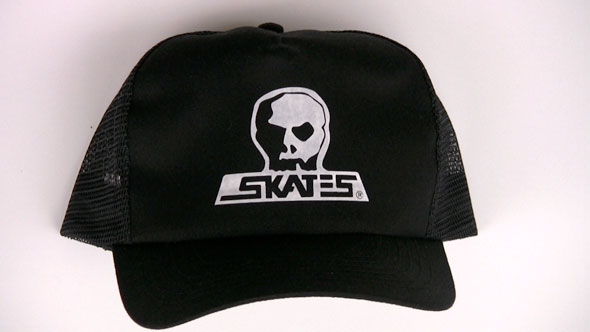 Odd Future, here you are in Austin, Texas. Did you bring any merch with you guys at all?

T: Not this time.

I have some suggestions for merch for you guys. Right off the bat, there was a band in the 1990s called The Drags who had their own barf bags. [hand Tyler a Drags barf bag] What do you think about Odd Future barf bags?

H: Wait, it just doesn’t feel right. [pretends to shit in the bag]

So Odd Future, shitbags then? 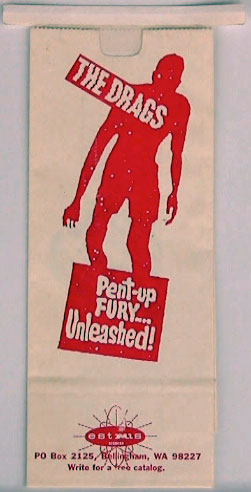 Now, you actually are on to something Hodgy, because, let me propose this to you, Tyler, check this out. You guys like Eminem, don’t you? Look what Eminem had for a promo item and this is going to top them all. An Eminem urinal mat! [hand Tyler an Eminem mat ]

Now how would that work for Odd Future, an Eminem urinal mat?

T: Yeah we’re making these. We’re putting them on people’s faces though.

Odd Future, here in Austin, Texas, Odd Future, also, I’d like to ask you and give you some gifts, too, from some people I think you’re influenced by.

So here it comes, first off, we have right here, Tyler… [hands Tyler an Alan Tew record]

What can you tell the people about Alan Tew?

T: I like him. He’s an awesome jazz artist. Fuck. This is random. How do you know this shit? 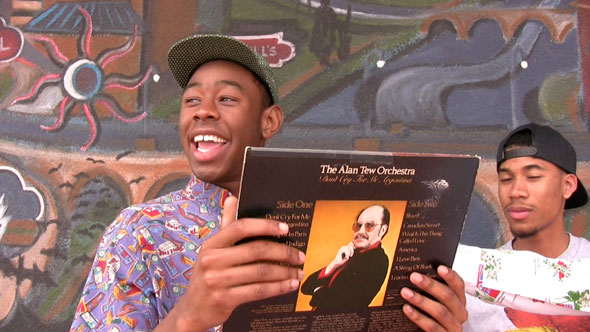 To continue on, another gift for you Tyler.

T: I’m about to put my balls out. Everybody look away. Naw, I’m not going to do it.

Another gift for you here Tyer and Hodgy, here we have right here a James Pants Meets… [hands him James Pants record]

Now what can you say to people about James Pants?

And here he is with the Egyptian Lover, an electro legend from L.A.!

T: This nigger used to fuck with N.W.A. and shit. That’s crazy.

T: This is my nigga. 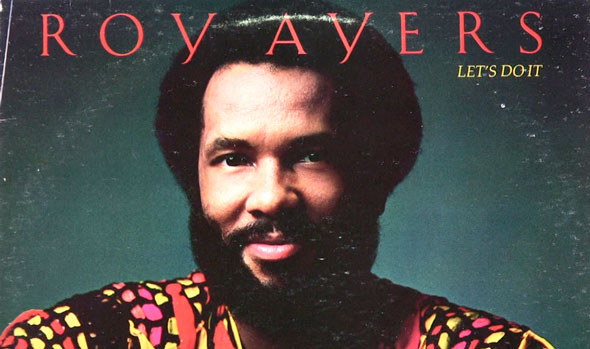 Is this okay for you Tyler, because you’re looking for more of the unreleased aren’t you?

T: No, I’m about to go buy a fucking record machine. The thing is this nigga has so much music that everything I get from this nigga is awesome because there’s too much to have, so this is great. Tightest nigga ever.

Tyler you are, Tyler the…

Creator! And Tyler, Coming out very soon, Gob… Goblin, your solo album! Were you at all aware of what existed in the 1970s, Goblin the band. [hands Tyler a Goblin 8-track]

T: They used to do Italian soundtracks and shit. And this is a fuckin’… How the fuck did you get this?

I live in Canada, we still have 8-tracks!! 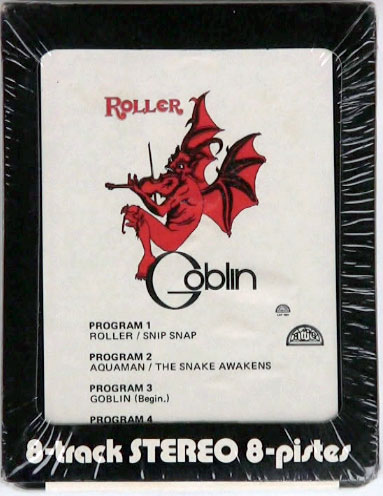 Now it doesn’t stop there for Goblin, what other goblin stuff do you guys know about?

T: I know they’re in relation to gnomes. To lawn gnomes.

There’s another Goblin band I want to tell you about and I think you’re going to love these guys, Hodgy and Tyler. What is the name of this band? 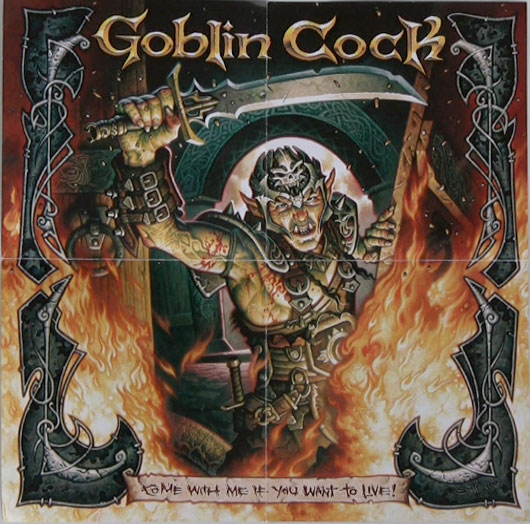 And you are Tyler The Creator and right beside you Tyler, we’ve got Hodgy Beats. We’ve got to give it up for Hodgy Beats. If we pan over there, who else do we have?

And right back here we’ve got the Hodgy Beats. I got a gift for you specifically, Hodgy Beats. What can you tell the people about your favorite movie? [hands Hodgy the Belly Soundtrack]

H: Oh my god, how does this nigga know? Oh my god! 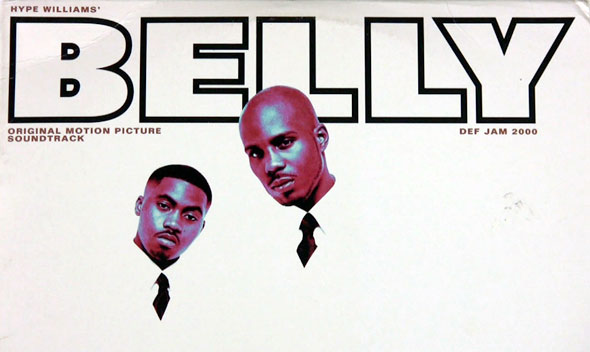 It’s a double LP, you guys can share. One person that’s not here is Earl (Sweatshirt). Was Earl the best rapper ever at the age of 15?

Nobody can compare to him, nobody.

Did you know that instantly? What did he first spit out that you knew that he was Earl?

T: I’m crazy, niggers know me, with my nigger Trazy. I’m Trazy by the way.

You’re really good at kicking back the tunes there Tyler.

You love covering tunes. Another little gift for you here, Odd Future. This is your favorite tune right here. Ciara! [hand Tyler a Ciara 12”]

T: Ciara, she tall as fuck.

Now Tyler, you’ve been saying a lot of “fuck.”

Fuck Steve Harvey. What about the other Kings of Comedy? Like Bernie Mac? Cedric The Entertainer?

T: Bernie Mac is one of the fucking greatest. And he’s one of the only people that died that I was like, “Oh shit. That sucks.” He’s awesome.

You’re down with Soulja Boy. You’ve talked to him before, haven’t you? Has he told you anything about Kat Stacks? Has Kat Stacks come after the Odd Future at all?

T: Dude, I want to fuck her so bad. I want to be on that list of rappers that fucked her so bad. Kat Stacks, return my calls, bitch.

T: Tweets because it says “@fucktyler” and…

T: It’s kind of common sense. I put two and two together. He’s chill though.

Did you think about getting another tweeter just for that so he could retweet, like, another tweet so it could link to the Odd Future tweeter?

T: Uhhh… what? I didn’t hear shit you just said .[laughs} That’s cool, though. [points to Nardwuar] This nigga tight, nigger. This nigga got money and bitches. Look at this nigga’s shirt, nigga.

No, I’m Nardwuar The Human Serviette with…

Alright, Thanks so much Odd Future. Keep on rockin’ in the free world and doot doola doot doo…