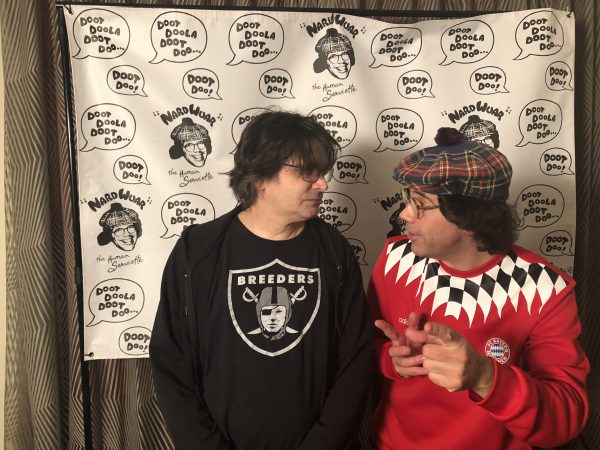 Nardwuar: Right off the bat, Steve Albini, I want to ask you about the importance of this band right here, the Mentally ill.

Steve Albini: The Mentally Ill were a unique and perverse punk band in Chicago. Well, actually, Deerfield, which is a suburb north of Chicago. They were a group of friends who played music and made one fantastic single and then later some other recordings. They played no live concerts during their initial incarnation and then many years later they reformed and played a concert or two.

Steve Albini: Brutal. One of the ugliest sounds every on record, yes. This record is a pivotal record in the sound of punk rock, in my opinion.

Nardwuar: I have a gift for you. I’m not sure if you already have this gift, but I’m giving it to you. Kurt Cobain’s Journals. Are you aware of his journals, Steve?

Steve Albini: I think I was aware that this happened, but I haven’t looked through them, I don’t know them.

Nardwuar: It’s your own copy, for you.

[Steve turns to a page in the journal]

Steve Albini: This [looking at list in Kurt’s journals] is a Big Black song called “Crack Up” which only appeared on a compilation album, a touch-and-go compilation called God’s Favorite Dog. That’s a deep cut, as they would say. Some people would say. I wouldn’t normally say that, but I feel like it’s kind of appropriate here.

Nardwuar: It’s in Kurt’s journals, for you.

Nardwuar: Was it fun recording Nirvana? Did you really light farts on fire?

Steve Albini: There was some fart lighting, but the band also got into this thing where they would spill alcohol on things and set it on fire. One of the things they spilled alcohol on was Dave Grohl, so there’s some polaroids of Dave Grohl with his ass on fire, things like that.

Steve Albini: Gene Simmons actually phoned the studio looing to speak to the band, he had been given that number by management or the record label or something. And he called the studio and Kurt didn’t want to talk to him, he handed me the phone and said, ‘you know, you can deal with him.’ So, I pretended to be Kurt for a while, talking to Gene Simmons. They had a thing set up there, you could record the telephone calls, so we recorded the conversation with Gene Simmons where he admitted basically he wasn’t familiar with Nirvana’s music or any of the bands that Kurt was friends with, he wasn’t familiar with their music.

Nardwuar: So, Gene thought he was talking to?

Nardwuar: Yes, because one time I interviewed Gene Simmons and he said, ‘oh, I talked to Kurt Cobain.’

Steve Albini: Yes, sorry to break the spell there, Gene.

Nardwuar: Steve Albini, what is the importance of Roctober Fanzine?

Steve Albini: [Laughs] Roctober is a terrific fanzine done by true enthusiasts in the Chicago area. They do a fantastic job of dredging up niche and perverse musical acts of all description. Bands with animals in them, bands that wear costumes, bands that perform with puppets, bands with inanimate members, stuff like that. I’m a big fan of Roctober, and I strongly support the endeavor.

Nardwuar: I have another gift for you and I’m not sure exactly, Steve, if you have any gifts I’ve passed, or if you have it, that Pansy Division – Manada.

Nardwuar: What do you remember about Manada and do you collect all the records you have made?

Steve Albini: I don’t, actually, and I don’t have a copy of this record. Pansy Division, fantastic punk band, and I remember specifically the song “Hockey Hair,” about having a fling or developing a relationship with someone you’re embarrassed to go out with because he has hockey hair. I thought, yes, truly terrific band.

Nardwuar: Cops. You weren’t too much a fan of that band.

Steve Albini: No, they were awful.

Steve Albini: I admire the name Asshat, tremendously. I especially admire their logo. I don’t know if you’re familiar with the Asshat logo, but it’s a magnificent drawing of a bowler hat that also looks like an ass, with a feather plume coming out of it, that also looks like a fart plume. Absolutely magnificent logo, I’m unfamiliar with Asshat’s music.

Steve Albini: Only because they’re bad.

Nardwuar: Why didn’t you like MDC, I’m just curious?

Steve Albini: They were stupid and bad.

Nardwuar: Who was good? What is the opposite of stupid and bad?

Steve Albini: Do you want me to name a band that I like?

Nardwuar: What’s the opposite of MDC?

Steve Albini: I’ve never really thought about it in those terms, but… do you want me to name a contemporary band of MDC who were great? A band like The Ex, would be a really great counterexample.

Steve Albini: I believe you have just named some songs by the first band I was ever in, a band called Just Ducky.

Nardwuar: Yes. Do you remember those songs at all? What was that era like?

Steve Albini: Until you just refreshed my memory, no, I wouldn’t have been able to recall those song titles. We were teenagers, we were learning how to play instruments and learning how to be in a band.

Nardwuar: In that era, Free Range zine said you were duck taped to a chair?

Steve Albini: Ah. Something about that sounds familiar, but I don’t remember.

Nardwuar: For a review?

Steve Albini: I don’t-, oh, I know what happened. Oh, what you’re describing is a stunt for Forced Exposure fanzine where I was duck taped to a chair and blindfolded, and then Byron Coley, who was one of the editors of the fanzine, played records for me and I was asked to review them while blindfolded and taped to a chair.

Nardwuar: Did you keep a pet cockroach?

Steve Albini: No, although there was a cockroach in-, a large cockroach, a large dead cockroach, in a Ziploc bag who was named Archie, in an apartment that I lived in in Chicago.

Steve Albini: Who else wears a guitar strap around their waist? Santiago Durango, the other guitar player in Big Black, adopted the proper guitar strap technique.

Steve Albini: Yes. I seem to recall the Australian band The Mark of Cain, I think their bass player adopted the proper method of guitar strap-wearing.

Nardwuar: What is the correct way to wear a guitar?

Steve Albini: Are you doing the Wayne and Garth quote from Wayne’s World?

Nardwuar: And, of course, I’m not worthy meaning Metal Urbain !

Nardwuar: You love them, don’t you? I think you said, ‘I’m not worthy.’

Steve Albini: I would have, yes. I’ve met Eric Debris from Metal Urbain, but I’ve never worked with the band proper. Their early records were real gamechangers, they bridged the gap between the pure noise electronic element of experimental music and the sort of driving aggressive punk rock music of the time. At the time, it was a unique synthesis.

Steve Albini: Jim’s is a South Side institution in Chicago, it’s an all-night sandwich and hotdog stand, and they sell magnificent Polish sausage.

Nardwuar: What about Jarrito sodas?

Steve Albini: Fluffy Coffee is a kind of latte drink we make at the studio where I work. As our resident coffee expert, Taylor Hales, calls it, it’s a very dry latte, meaning it’s a lot of milk and not a lot of coffee. The milk is mixed with maple syrup before it’s foamed, so you end up with some delicious maple syrup foam, sort of like a marshmallow, on the top of your coffee drink. And the coffee is mixed with cinnamon, so you have slightly-, there’s a whiff of exotica about the coffee flavour, that’s all.

Nardwuar: Here you are with me, at South by Southwest!

Steve Albini: Everything you are saying is true.

strong>Nardwuar: Which you kind of said you wouldn’t go to, before?

Steve Albini: Yes. The reason I’m here is because Kim Deal was going to be here, and she needed, wanted someone to act as her interviewer in a setting where she would be telling her story to people about where she was in life, what’s up with her new record, that sort of thing. She asked me to do it and I am constitutionally unable to decline something that Kim Deal asks me to do, I’m putty in her hands.

Steve Albini: I’m doing my best. I don’t have any particular sales pitch for myself. I’m just trying to earn an honest living and doing what I can to uphold my end of the culture.

Nardwuar: Well, thank you very much, Steve Albini. Keep on rocking in the free world, and doot doola doot doo…