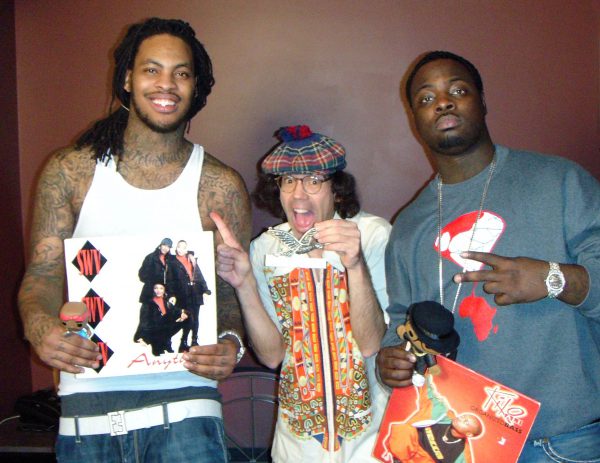 Nardwuar: And Waka, who do you have beside you?

Nardwuar: So right off the bat I have a gift for you to welcome you guys to Vancouver, British Columbia, Canada.

Nardwuar: We have something here that is dear to your heart right now, an SWV LP.

WFF: How do you know that?

Nardwuar: What can you tell the people about SWV?

Wooh: They sexy. Real nice [dances back and forth].

Nardwuar: How important is that, Waka Flocka?

Nardwuar: Waka Flocka and Wooh Da Kid, here you are in Vancouver, British Columbia, Canada, as I mentioned. I guess I was wondering there, Waka, do you still like salt & vinegar chips?

WFF: Yo, this guy’s crazy! How do you know that, man? I love them. Them’s my favorite chips.

WFF: Damn. You know them all. Yo man, this guy’s like Cleo, man. Yeah, I love it. You hit them all on the nose.

Nardwuar: What are your favorites though of all those ones?

WFF: My favorite? It depends, man. It depends on who’s cooking, who’s on that grill, man. But usually I like the boneless. The boneless, like those spicy barbecue joints. They be crazy. When they make them kind of Cajun, they be crazy.

Nardwuar: What can you tell the people, Waka, about Mr. Sammy Sam?

WFF: Wow! Wow! Yo man. Sammy Sam was great, man. I grew up listening to him, man. Hitman Sammy Sam.

Nardwuar: Like he’s an important foundation for Atlanta, right?

Wooh: How did you find this?

Nardwuar: Well, we have to find it for you guys.

Wooh: There’s a question right there. How did you find this, man?

Nardwuar: We love the ATL stuff. Like for instance, Mr. Kilo-.

WFF: Wow. You know, we tell motherfuckers like you, you my nigga. So you my nigga for this Kilo Ali right here, see. Baby, this is the shit right here.

Nardwuar: For the people that aren’t familiar with Kilo Ali, what can you tell them about him?

WFF: Kilo Ali, that’s when I originally, like, first moved to Georgia, to the SWATS, to like, Diplomat Drive, like Campbellton Road, like, Kilo Ali was Atlanta. You know what I’m saying? Like, he was the guy who turned the parties up.

Wooh: He turned the parties up.

Nardwuar: When you guys were growing up…

WFF: How the fuck did he find this Kilo Ali?

Nardwuar: Actually, speaking of that, has the breast been brought to the Brick Squad? How’s the tour going for the breast?

Nardwuar: I have a quote for you Waka and Wooh Da Kid. Here it is. “She’s a tiger-striped…”

WFF: But you just fucked me up! Like, how did you…like, this guy’s really on it, man! Yo, Reema’s a pit, man. She’ll be back, too, tomorrow. She got sick as hell, man, from the road. Yeah, she’s crazy. Yo, like, she reminds me of Queen Latifah, MC Lyte, and, like, just mixed in one, you know what I’m saying? She’s just…

Nardwuar: And she’s from Canada. Canadian!

WFF: Yeah she is sick man, I swear to god that girl is crazy.

Nardwuar: And on this tour I notice you’ve been mentioning punk rap. Are you into the, what is punk rap?

WFF: Punk rap is the genre I created. This is punk rap when you listen to me.

Nardwuar: So you think you’re the first punk rapper out there?

Nardwuar: I also wanted to ask you, Wooh Da Kid and Waka Flocka…

Nardwuar: About some more foundation. A gentleman that you played with, I’m pretty sure here, Waka Flocka, you played right here with Doug E…

Nardwuar: What can you tell me about Doug E. Fresh and the gig you did? I think you did, like, a Soul Train gig with him, or some gig about the Soul Train Awards? Do you remember that?

WFF: You know who Doug E. Fresh is man? Do you know Doug E?

Nardwuar: I haven’t got that close to know Doug E. though, but you know Doug E. Didn’t you do some gigs with him?

WFF: No, I ain’t never do nothing with Doug. Nardwuar is wrong. [laughs]

Nardwuar: Well, you did play like some Soul Train gig that I think he was part of, wasn’t he?

Nardwuar: Thank you! I was worried there.

WFF: Yeah, he was, he was. A really cool guy, man. Like, an interesting guy. Like, he ain’t cocky like a lot of them. Cool, cool guy, man. [Waka looks at the Doug E. Fresh LP cover]

Nardwuar: What is catching your eye right there, Waka Flocka?

WFF: History. This shit’s crazy. It’s like history repeats itself, because everybody’s rocking their jersey…

Nardwuar: Can you show the people what’s going on here?

WFF: Everybody’s rocking that kind of style of jersey now, and he got a Bally shirt on. That’s just 360 ,ain’t it? I see what’s going on, you motherfuckers.

Nardwuar: Wooh Da Kid, could you explain to people what Waka’s like onstage? Like, he jumps in the audience, doesn’t he?

Wooh: He a wild boy. He’s out of control. Ain’t no, I’m going to tell you the truth. He don’t even know what he’s about to do half the time. I know it. Like he just go, “Whatever happens happens,” like spur of the moment, you know what I’m saying? So that’s how he works. Works security out.

Nardwuar: And I love the way how, like, you see the crowd. Like people are like, “I was at your gig.” You know if they’re at the gig, don’t you.

Nardwuar: Have you ever been, like, running through the audience, you’re like, “Oh my god, you’re here!” Has that ever happened?

WFF: Yeah. I always run through the audience and see people I seen earlier that day. You know, and I’m like, “Oh , what up!” Show a little love to them. You know how that goes, man. I love the energy from the people. Like, if the people don’t got no energy, I’m dead.

Nardwuar: And what was it like in Paris, having Mos Def and Common as hypemen up on stage with you?

Nardwuar: I have another gift for you guys, lastly here, from Vancouver, British Columbia, Canada. A Kool G Rap puzzle.

Nardwuar: Open this up.

WFF: Hell yeah! That’s the first gangsta rap I ever seen in my life. Him, and Eazy-E. Two firsts.

Nardwuar: There’s actually another person I wanted to ask you guys about, lastly here. Slick Rick?

Nardwuar: Did your mom or aunt tell you anything about Slick Rick at all?

WFF: Yeah, my uncle produced one of his albums. James Antney.

Nardwuar: No way, really? He also did LL Cool J too, right?

Wooh: There we go.

Nardwuar: Well, Wooh Da Kid and Waka Flocka Flame, thanks very much for your time. Anything else you want to add to the people out there at all?

WFF: Yeah man, we want to tell the people, just thanks for fucking with us, man. Staying down with us, staying in tune with us, man. Keeping the hustle strong, keeping the grind original, you know what I’m saying? Like, and Nardwuar, man, for being on his shit.

Wooh: Definitely Nardwuar, hey, he’s definitely part of the squad now. So when y’all see him, just say, “Squad.” He know what it is.

Nardwuar: Well, thanks very much, Brick Squad, keep on rocking in the free world, and doot doola doot doo …

WFF & Wooh: doot doo! You didn’t think we knew that, did you?